Posted on September 9, 2013 by tikiwanderer 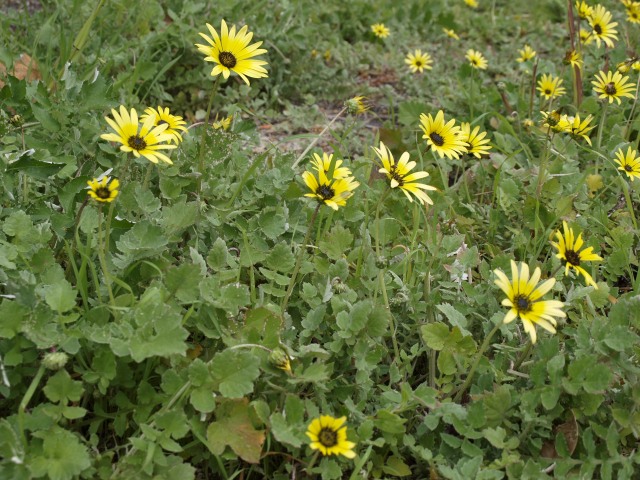 A swathe of unmown flowering capeweed, growing on otherwise-bare sand in a fully-exposed-to-sun site. Each plant will produce perhaps a dozen flowers, perhaps more, over the season for a total of up to 4,300 seeds per plant.

The Cape Daisy or Capeweed (Arctotheca calendula) is one of my favourite weeds. Not because it does anything particular – but because it’s cheerful and surprisingly accommodating. It makes lovely meadows and swathes of bright yellow daisy-like flowers even when regularly mown back or walked upon, and unmown and untrampled plants generally don’t get taller than about 30 cm at the far outside so it doesn’t create a huge fire or snake hazard. They do grow thickly enough to shade out and crowd out other kinds of weeds for the most part so you don’t get an utter jungle, but you do get a few other pasture weeds here and there amongst them. The leaves are soft and juicy from a caterpillar point of view – the Wanderer butterfly relies on the Cape Daisy as an abundant food source since we’ve cleared most of the native vegetation it used to feed on, and there are at least nine other local butterflies that do too. The leaves break down reasonably well and swiftly into new humus – again, low fire and snake hazard in summer as the plants are usually almost totally broken down by then.

They grow happily in sand, even full-sun-all-day spots (which they actually prefer!), and colonise poor sandy soils easily (which is why they’re a weed here in Perth). They originally came from similar conditions in South Africa. Early colonists travelling by ship from England would stop in South Africa on the journey, and many brought some of the beautiful new wildflowers they saw there with them. It’s that impulse to garden with beautiful things. Though it’s also quite likely that the first seeds arrived here hiding in shipped-in livestock fodder, as it was first recorded in Albany, Western Australia in 1834. It was found near Fremantle and Adelaide not long after, and then at other ports. From there it slowly spread into the southern drylands, though it took a long time to establish well in Sydney.

Capeweed starts sprouting with the first rains in autumn and early winter, and just kind of straggles along in a tiny way through winter. It then really takes off in growth as the soil warms in early August. Flowering usually starts about two weeks later, and goes for up to four weeks. Bees love the flowers. The plants tend to die off once rainfall gets erratic and the soil gets too warm, usually during the season of secondspring. At that point the barren soil they’ve been growing in starts to look pretty dry and barren again, so they’re not a good summer cover at all. But as far as winter cover goes they’re close to ideal. 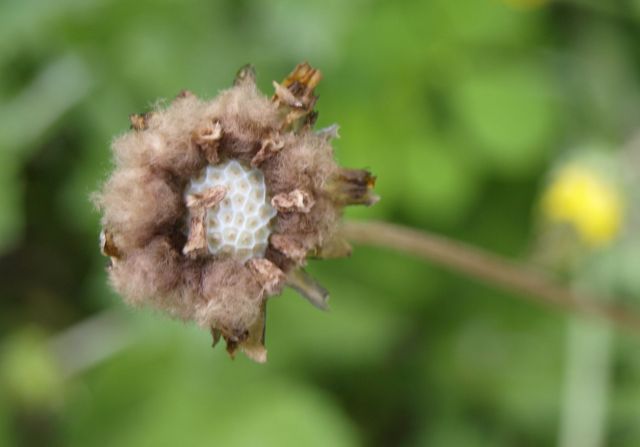 Capeweed flower gone to seed. The seeds are covered in a fine wool that prevents them from dessicating in drought and which attracts moisture to them, allowing them to germinate after the first light rains in autumn and to survive “false breaks”.

The seeds do seem to need to take hold in exposed soil – despite hundreds of flowers last year, and hundreds more this year from last year’s seeds, none grew in the thickly-mulched garden bed that my swathe of Capeweed curves around. Or the thickly-mulched bed on the other side. In fact, none anywhere I’d mulched, except for one spot which had been dug bare by cats a couple of times during seedfall. Not even in the area which had been under last year’s mulch pile but which was cleared bare by the time sprouting began. So managing the swathe in the front garden looks like it’s going to be reasonably easy – I can have my carpet of flowers in spring without worrying about it escaping into the marked beds. Just need to get the mulch down each year before the flowers go to seed. Or possibly even after – my reading suggests that the seed doesn’t like being buried, so mulching over the top will be fine too. Most seed germinates the first year, most of the remaining seed germinates the second year. Only a very small amount remains dormant for longer than that. So preventing germination by burying or providing unfavourable environments (such as shade – planting taller shrubs) is one way to control it, another is simply weeding it out (it usually pulls easily).

To the best of my knowledge Capeweed has no human food or medicinal value. It has some value as livestock forage but that’s mixed, as a) livestock tend not to graze it as their first preference and b) it’s a nitrogen and metal concentrator so heavy grazing of it can have toxicity problems. Moderate grazing increases its prevalence in a paddock, as being occasionally defoliated by either animals or a mower makes almost no difference to its seed-set but fertilising it certainly encourages it -grin- (light or heavy grazing decreases its prevalence slightly). In weedscaping terms, Capeweed has one particularly interesting property. Because it’s so good at nitrogen capture from leaching, it can absorb excess liquid fertiliser quite well. The poor soils it tends to grow in don’t hold water or liquid fertiliser in them for long – the stat for Perth I always keep in mind is that plants here have 12 minutes – yes, just 12 – to absorb any liquid fertiliser that lands by them before it’s passed on by and out of their root range. The faster they can absorb it, the more they get. So Capeweed can help ameliorate accidents of overfertilising (easy to do here) that lead eventually to river pollution and algae blooms. It can also improve the capture of any fertiliser you do use, trapping the nitrogen in the humus it forms when the leaves break down. An occasional mow during its season (frequent mowing reduces root volume and so reduces nitrogen capture) means extra organic matter – and nitrogen – getting stored in the soil. And throwing any plants you weed out into the compost will be good for the compost, as long as they aren’t seedy.

Edit to add: I forgot the most obvious point in weedscaping – that Capeweed takes highly exposed soil and makes it not-exposed for winter, which decreases the likelihood of hydrophobia over that season and allows more winter rain to penetrate (and we only get winter rain here). I also should have noted that many of the benefits or lack-of-bad-points I mention apply to urban gardens and urban landscapes – Capeweed can be a bit annoying as a crop weed in broad-scale farming. Its ability to germinate early, survive a false break and cover ground means it can outcompete other crops and lower their production. If it germinates at the same time as a crop and not too thickly, it’s not so bad.