The old avocado orchard – a story in photos

Posted on October 1, 2013 by tikiwanderer

We spent the weekend down on the family farm, and the kids came with me to explore the original avocado orchard my folks started up in 1973-74. It’s not in commercial production at this time for a number of reasons, but it is still productive and lightly managed, enough to provide avocados for a local farmgate outlet and anyone who makes the trek to our own farmgate. Here’s the orchard, in photos.

New leaves bud out from an old lichen-covered branch on one of the two-hundred-something trees in the orchard.

A cluster of avocado flowers, some open. Most of our successful trees are Hass which self-pollinate. In the interests of diversity, curiosity, commercial acceptability and longer harvest season there are other varieties in the orchard, most of which need cross-pollination and are planted where they can pollinate each other. 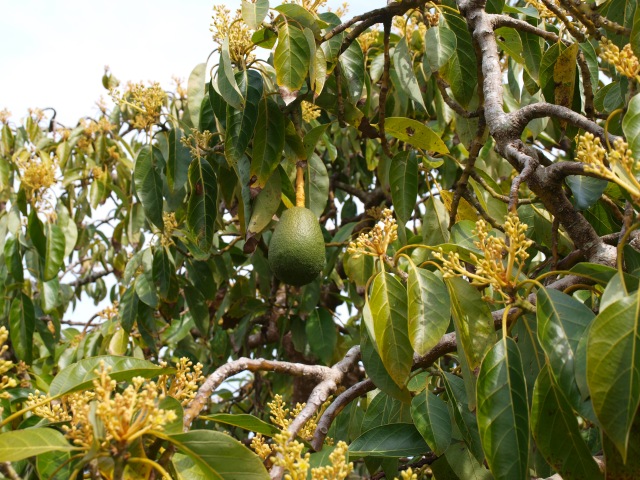 Avocados stay on the tree for around eighteen months, give or take a bit, but they set fruit every year. That means for half the year you’ll find two harvests on the tree at once. Here fruit for the coming season, to be harvested in January or February 2014, is surrounded by flowers that will set the 2015 crop.

This tree would have been grafted nearly forty years ago but it’s still young. The bare branches aren’t age, they’re dieback caused by Phytophora cinnamomi, an introduced fungal pathogen locally known as “jarrah dieback”. Affected trees die back from the tips but can reshoot from older growth. Avocado trees have a surface root system particularly susceptible to Phytophora. It’s the main reason this orchard has always struggled with production.

When the orchard was first hit by dieback a clear method of treatment hadn’t been developed yet. One suggestion was to interplant with citrus. That wasn’t terribly effective but the orchard still contains a fair whack of citrus trees. The development of a simple phosphoric acid treatment to manage the dieback (there’s no cure) was a relief to operations. 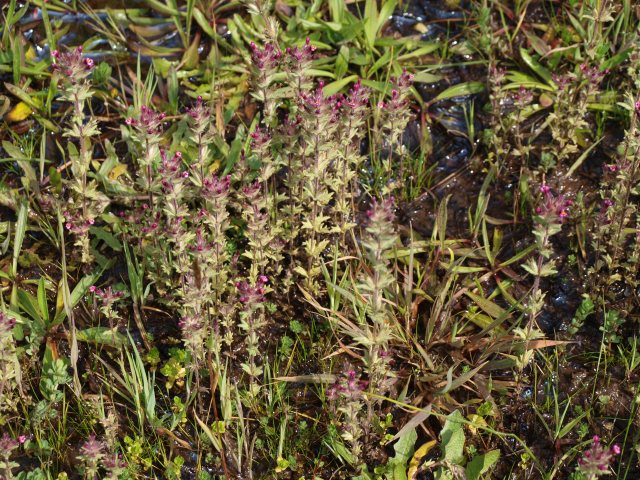 I tell a lie. There’s one probable cure for dieback, and that’s desertification. It needs moist soil to live, and it gets it here. Much of the orchard gets boggy at this time of year. Our dams are full or nearso, the soil of the orchard is holding all the water it can and starting to leak it out in a few random places. In the orchard, this little weed grows only in the places where water’s sitting on the surface of the ground.

The wild radish grows on the slightly higher soil, where it can stay out of standing water. There it takes advantage of the very moist soil to grow high enough to hide a small child. Especially one who loves eating things that taste like broccoli as long as they’re not actually broccoli. The orchard is slashed in time for summer and fire season but at this time of year it’s so wet and everything’s growing so fast that the weeds are always high.

Spring is glorious in the orchard, the small birds and insects love the feast of flowers and grassy seed heads to be found up and down the aisles. Some sections will be too wet to slash until the week before fire season starts, but snakes can be a hazard and we do need to find the irrigation pipes under all this. So weed management has always been an issue. Many of the trees are sprayed underneath with herbicide. We’ve also had a few inconclusive experiments along the way with trying to introduce into the aisles a weedscape of plants we’d prefer for management purposes. Nothing definite though. In this photo there’s Cape Daisy (yellow), wild radish (white), and French Flypaper (pink).

The aisles of the old orchard are grazed by kangaroos. The farm flock of peacocks also wander around, making meals of seeds, flowers and, when they find such as this, convenient collections of invertebrates. And the nutrients cycle onwards. We have discussed formalising and increasing the grazing-to-fertilising process (and reducing the need for slashing and spraying) by bringing in sheep or alpaca but need to confirm they won’t just eat the avocados like the foxes and possums do.

4 Responses to The old avocado orchard – a story in photos