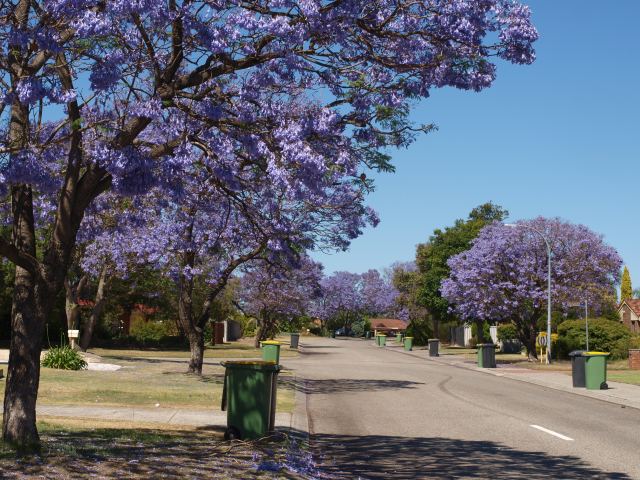 A streetscape of Jacaranda trees in bloom. Most of the time you see Jacarandas as large individual trees in random backyards, giving suburbia’s aerial view a scattering of purple spots that cool the sky. Every so often though you find several planted together.

Time for a floral calendar-of-the-trees update. We’ve passed the time for all the cool weather flowers, the delicate pink and white blossom types. Now we’re into the trees that loooove the sunshine. The Cape Lilac has come and gone – that’s usually an October tree – and the bottlebrushes I posted about last time I did a calendar post have all well and truly finished. As the bottlebrushes finish the jacarandas begin. They’ve been flowering well for a few weeks now, and as usual are dominating November. I love the way the colour of the flowers highlights the heat of the blue sky. 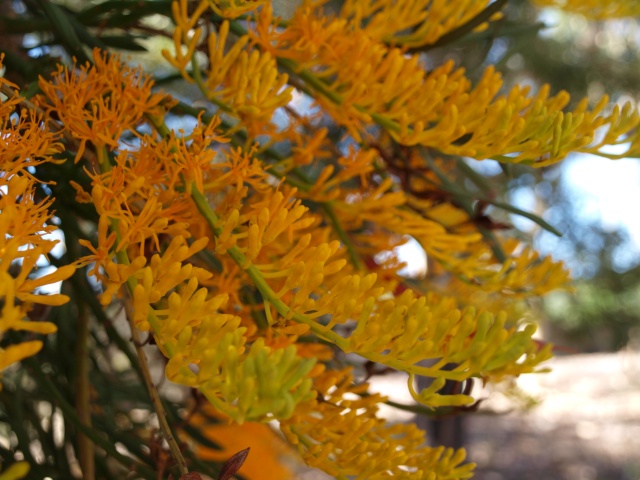 The flowers of the Christmas tree shade from a green-yellow through to a red-orange as they bud, open, age and wilt. Insect pollinators see these colours at different brightnesses than we do so the ready-to-harvest flowers really stand out to them in a way they don’t to us.

In contrast, there’s the W.A. Christmas Tree. Nuytsia floribunda gets its name from when it flowers. Further south it’s flowering at Christmas time, but here in Perth it starts at the end of November so it’s usually almost completely finished by the end of December. While the tree itself is easily overlooked most of the year, at this time in the calendar it’s a very distinctive and brightly gaudy part of our bushland and paddocks. At least to human eyes.

The tree is unusually and distinctively un-treelike in shape. This isn’t an accident. The Nuytsia is not really a tree. It’s a mistletoe, the only one in the world that grows from the ground into tree form. Its “branches” aren’t made of wood like normal trees though, they have the internal structure of exaggeratedly large mistletoe vines. So the “branches” aren’t strong enough to hold themselves up as true wood would. And the tree takes this odd, constantly-falling-down shape.

Being a mistletoe, the Nuytsia gets a lot of its water and nutrition from parasitising other plants. It does this underground, attaching its roots to those of other perennial plants. I tried to plant one in my garden but it didn’t get past the 18 month mark which is common, as that’s the point by which the young plants have to have successfully attached to sufficient hosts. I think mine attached instead to the winter weeds and died when they did. 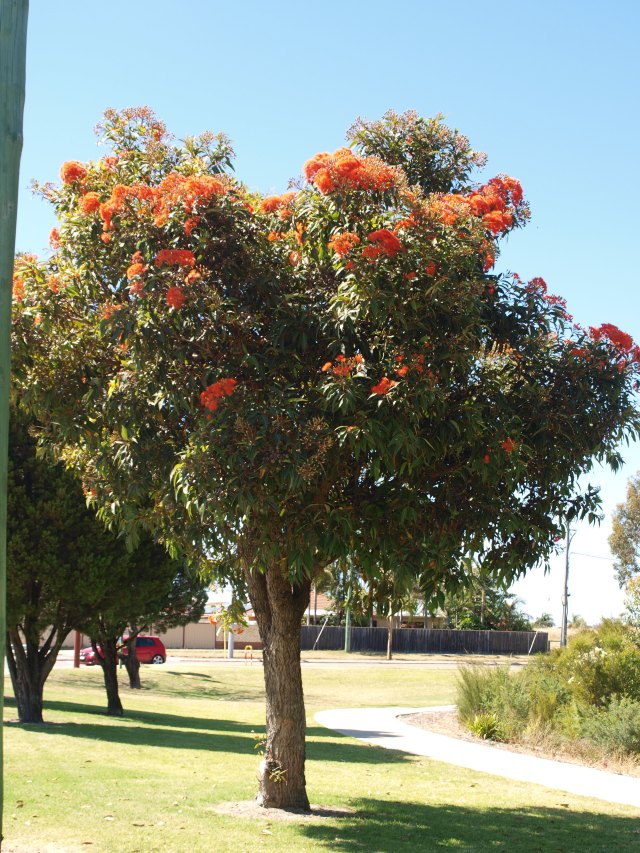 The Red Flowering Gum is a popular street tree around the country partly because it takes a very stereotypical tree-shape when grown in cultivation. In the wild it’s a shrubby erratic thing pushed around by coastal winds and tough habitat.

Lastly, the Red Flowering Gum. As the jacarandas reach their peak, the Red Flowering Gum starts to hint that it’s got something going on. The tree above is one of four in a line, and it’s the only one with much flower yet so it’s still only the beginning of this tree’s season. Red Flowering Gums are planted widely around Australia. They’re native to the south coast of WA so they don’t do as well in Perth as in other cities – we have all the pests that like to eat them – but they do well enough to be a common street and parkland tree here.

The Red Flowering Gum is in the genus Corymbia, which originated in wetter forest climes. Consequently all the Corymbias tend to have their flowers in big clusters right out at the ends of the branches where they are easily visible and can compete for pollinator attention with other trees in a crowded forest. These blossoms are the classic red.

The flower colour is unpredictable, usually red but it can be orangey, or quite scarlet like these ones, or even just a pale pink. There is a grafted clonal version with predictable colour shade becoming available in nurseries now.