Fermented brown gold (the story of my weed bins)

During the heatwaves I still have garden work to do, but it all gets done by 7 am or maybe 8 am at the very latest. The rest of the day will be a writeoff! Many of the jobs are things I was supposed to have done to get ready for the heatwaves 🙂 Saturday’s early morning job was to cycle the weed bins.

I have three big black lidded rubbish bins out in the garden. I put the grassy weeds, pulled/dug up couch grass and whatever else is in the weedpiles into the bins, fill them with water and leave them for ten weeks. The idea is that all the grasses, stolons and seeds are broken down or at least rendered inert, so that I can use the organic matter for other things without fear of simply creating new grass plantations. Most weeds and seeds will be mostly ruined by four or five weeks, maybe less with a good heatwave. Couch stolons though appear to have the ability to survive anything up to and including a nuclear strike. On the day after the apocalypse the cockroaches will be lazing under those little umbrella-like couch flowers eating pollen cake like there’s no tomorrow. I’m trying this weed bin process because I’m informed that even couch is killed by this drowning process – but it takes ten weeks, not four. 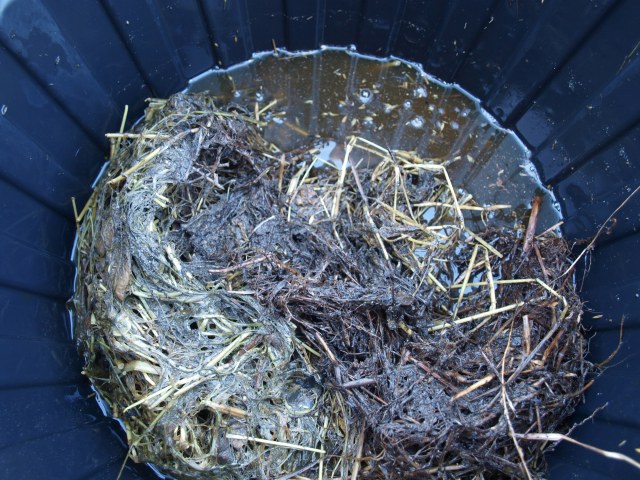 Halfway through emptying a bin, after ten weeks of fermenting. It smells like silage, strong but not rotten. Any broad-leafed weeds are completely disintegrated. The grass stems still hold their structural integrity but they’re a big mass of loosely associated carbon. Most of the nutrients are in the water.

The water level and overall mass has shrunk a little since the bin was filled. That water is excellent fertiliser, so I use it around the garden. It’s a way of ensuring the nutrients keep cycling in what is really a very nutrient-poor system. This batch of water all went to watering the various trees in zone 4. The organic matter itself got piled on the lawn area around the clothesline as a kind of mulch. 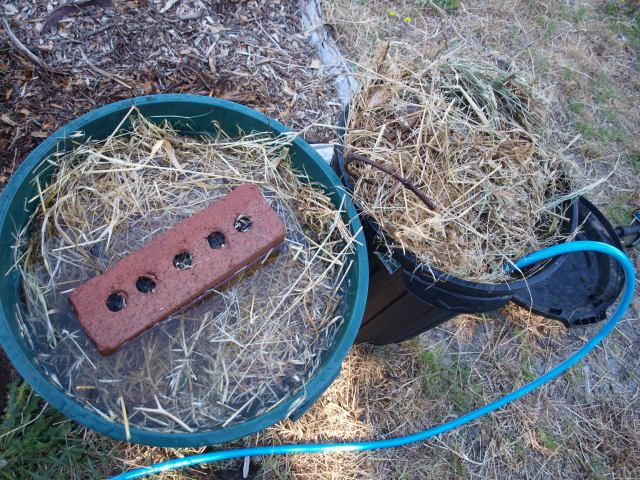 The bins are filled with new weeds for breaking down and then filled with water. The brick stops the grass from floating above the water level. The exercise probably costs me about 150 litres of water each time but I recover most of that for watering the garden.

I’m currently using three bins solely for this purpose, and barely got all of last year’s weeds cycled before this year’s arrived. If I was organised enough to ensure that only couch went into one bin and no couch into the others, I’d get more cycled through but as it is I have to let each bin sit the ten weeks every time. I may try and be more organised with next year’s weed piles. I did try this year but so many weeds! It ended up all just mixed together. I keep looking at giant bins and skips with a kind of opportunistic envy, wondering if I could convert one and do all the weeds at once.

I did the bins in the morning. This is what they looked like that evening after a 40-degree day. Water was still clear but brown, hot and very bubbly, and the smell of fermenting was strong. It gives me hope that I might not have to wait the whole ten weeks this time.

My verdict on whether this works to kill couch is still out – I’ve done a couple of loads now with inconclusive results. The couch is still recognisably couch but appears dead when I pull it out. The areas I put the now-heavily-broken-down brown matter into do get couch regrowing in them, but they’ve had couch in them before and there’s no guarantee there weren’t stolons waiting in the ground for what’s effectively a really good watering with a nice fertiliser and mulch topping.